TJC - How can Data Management smooth the transition to S/4HANA?

AP has already extended the deadline for migrating from SAP ECC 6.0 to SAP S/4HANA twice and, based on the outcome of its latest UK and Ireland SAP User Group (UKISUG) study, there is every chance it will be pushed back yet again.

61% of organisations in the UKISUG study said that data management challenges have either slowed or will slow the automation of their business processes from SAP ECC 6.0 to SAP S/4HANA. Two thirds of organisations admitted that data management is a challenge when moving to SAP S/4HANA. Our own experience verifies the comments made by the UK and Ireland SAP User Group (UKISUG). When organisations tackle strategic projects, the general health of their enterprise data housekeeping is exposed. We also know that, as recently as 18 months ago, out of all the SAP ECC users worldwide, only 30% had already migrated to S/4HANA and 58% said they had no plans to transition in the next 3 years.

Lack of preparedness in Data Management

As the UKISUG research has highlighted, it is the general lack of preparedness in data management that is the main issue affecting migrations to HANA.This is not surprising because most organisations either fail to appreciate the importance of data management early enough, or they lack the resources to invest in it properly. Why would they tackle data management when there are so many other pressures and priorities to focus on?

One problem is that managing data isn’t at the glamorous end of enterprise IT. It is not regarded as business critical, but the negative consequences of data management definitely are. Given that most of the organisations migrating to SAP S/4HANA are doing so as part of digital transformation projects, getting to grips with data – and especially the volume of data to be migrated – is more important than ever.

The power of Automation 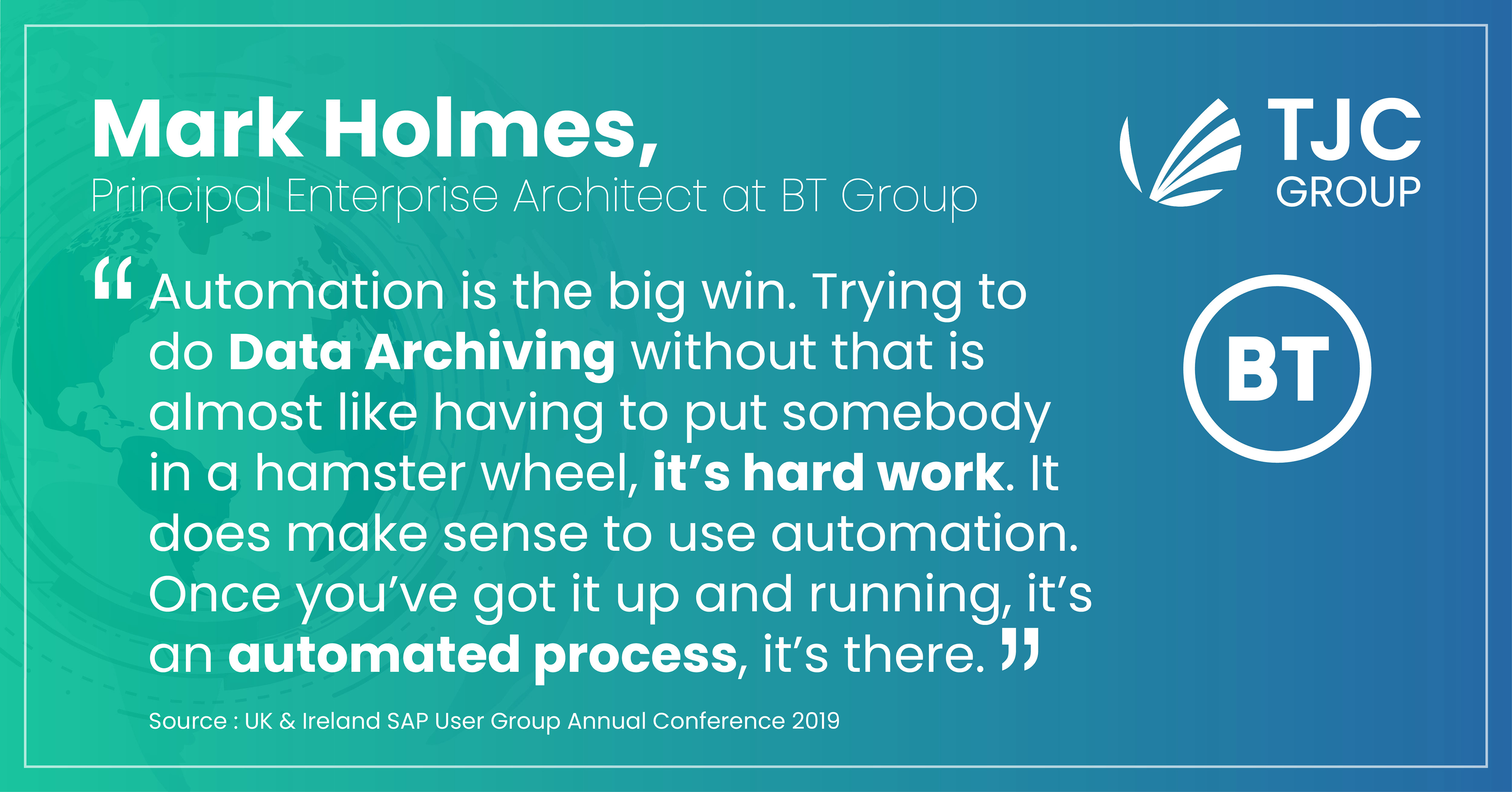 SAP Data Archiving is the most effective way to manage your data lifecycle. However, if done manually, data archiving is highly complex, resource intensive and, frankly, is rather boring. That’s why it is best automated.

As SAP have stated, data management is a "key pillar" for an implementation project involving moving older generations of SAP's ERP systems, such as SAP ECC 6.0 to S/4HANA. One of the biggest challenges arises from having too much data residing in ECC to be migrated because this then makes the cost of moving to S/4HANA much more expensive than it needs to be. If an organisation does not practice ongoing ILM (Information Lifecycle Management) or undertakes periodic data archiving, they can have an awful lot of data residing in their database tables.

Digital transformation tends to increase the amount of data being produced. Consider e-commerce companies, telcos, online financial services providers, and the high number of transactions involved with delivering their services. All this creates more data and typically, data volumes in data intensive organisations will organically increase by around 4TB every year.

Given that HANA memory costs approximately £31,000 per terabyte per year, that is potentially a huge re-occurring expense that will continue expanding indefinitely unless brought under control. Although S/4HANA is an ‘expensive’ business platform, the hosting charges are not excessive compared with other providers, take Amazon Web Services as a good example. By trimming the data hosted, many international companies using SAP will be able to save between £200,000 and £400,000 every year, either on HANA memory, or with another vendor. The challenge is finding ways to be efficient and making sure you only store the data that is needed by the business or Government bodies.

Another data management factor to consider when planning the transition to SAP S/4HANA, is the time needed to complete a migration if archiving has not been completed.Pre-migration preparation to get your data in shape will make the migration process faster, which also minimises any impact on ‘business as usual’ operations. It is also far easier to do an archive before migration rather than afterwards. This is because the data structure in S/4HANA is different from ECC. The more data held in your current system, the longer, harder and more complex the migration will be and potentially, the more downtime an organisation will incur when converting that data into new formats. 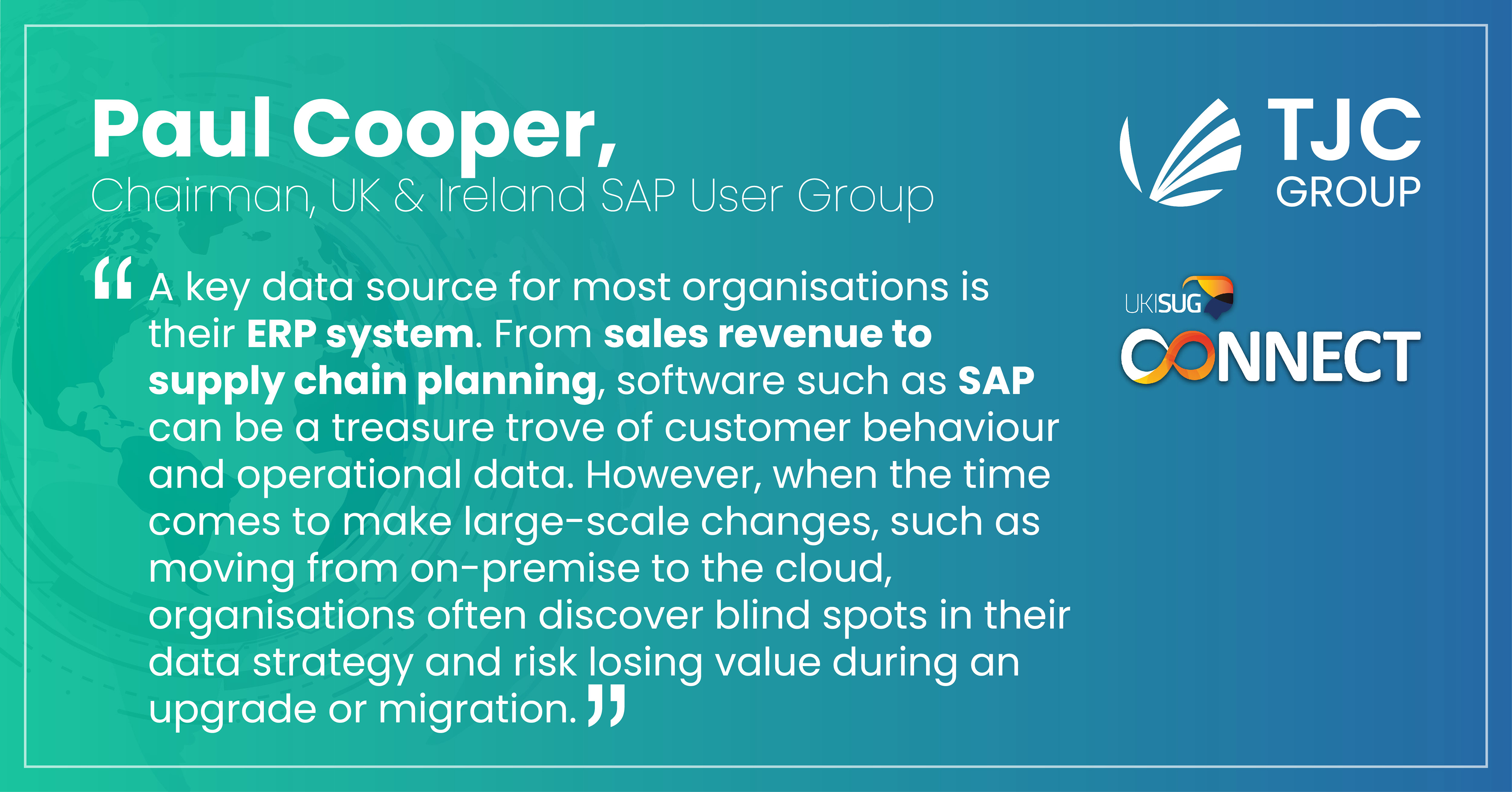 Ongoing system performance due to excessive data volume growth is another factor to consider when evaluating the benefits of archiving. Users will typically see a 65% higher operational performance improvement after archiving, for instance, increased speed of running reports, backups, and day to day system latency.

Finally, no discussion about the importance of archiving could be complete without also highlighting the environmental implications of storing data that’s no longer needed. If data growth gets out of hand, it will mean paying £100,000s on wasted hosting, not to mention the environmental impact of all that wasted energy.

It’s important to appreciate that effective data management requires an ongoing and, ideally, automated data archiving programme. It is not a one-off activity; new data is being created every day and there will be transactions to archive on a weekly or monthly basis. Keeping on top of the data growth minimises cost of ownership and will mean that your newly digitally transformed business is as customer responsive as it can possibly be.

< Back to all news

Thursday 16th June 2022 TJC - How can Data Management smooth the transition to S/4HANA? SAP has already extended the deadline for migrating from SAP ECC 6.0 to SAP S/4HANA twice and, based on the outcome of its latest UK and Ireland SAP User Group…

Wednesday 15th June 2022 Supply Chain Management: How to optimise it, and why it's more crucial than ever. In the wake of globally disruptive events like the Covid-19 pandemic and the Russia-Ukraine war, there is arguably more pressure than ever before to manage supply…

Don't miss your last chance to get Learning Hub this year! sapusers.org.../learning-hub With 60 hours of complimentary… twitter.com/i/web/status/1…